Dennis (Denny) Thibault, Born in Minnesota in 1942, raised in Grand Forks, ND and Blaine, Wash. Military time spent with the Army, assigned to the 82nd Airborne Division in a Recon Group and was an active Jumpmaster of several fixed wing (C-130 was my favorite) and helicopter  aircraft.   Attended colleges in Washington and California. Spent  working career with Engineering, Construction and Logistical Support Companies globally (Brown & Root ,KBR, Bechtel) and retiring from Fluor Corp. in 2008. A member on the American Legion since 1966. Currently serving as Post Historian.

I entered the Army on February 1954 and took basic training at Fort Leonard Wood, Missouri.

In late 1954 I was sent to Germany with the first Guided missile unit to be
deployed overseas. The Corporal missile. It carried an atomic war head
and was meant to target the Fulda Gap, an area thought to be the
main attack route by the Russians.

After one year with that unit I volunteered to go to the Seventh Army
NCO Academy in Munich, Germany. I graduated as the
distinguished graduate which gained me a promotion from Specialist
3rd class to staff sergeant E5.

In 1956 the type 1 Corporal replaced by an improved version, the Corporal
2.  My unit was disbanded. I was transferred to an atomic weapons depot
where I gained a new MOS  “Atomic weapons electrical assembly”
technician.
From 1957 until June 1960 I was in the army reserve. During this time
I attended Indiana University and Evansville University Freshman and
Sophomore Years.
In June 1960 I re-enlisted in the Army and was sent to Fort Monmouth again
for refresher training.  Then back to Ordnance Guided Missile
school at Huntsville Alabama for training as an internal guidance and
Launcher Electronics Technician on the Hawk Missile System.
I then joined up with an Ordnance General Support Co. And deployed with
this unit to Korea 1961.
Back to Conus 1962 as a staff sergeant E-6.   Note: I Never had to change my stripes.

​From September 1962 Until January I964 I was platoon sergeant of a
maintenance unit at Red Stone Arsenal Al.
In 1963 I applied for and was assigned for Aviation School in Alabama. I was
to attend the flight school in June of 1964.
I then learned of a Warrant Officer Candidate School starting In January ‘64
thinking that this was a better deal than flight school, I submitted a 1049
Withdrawing from flight school and resubmitting for the Air Defense Artillery
Warrant Officer school at Fort Bliss, Texas.
Two weeks after applying for the school I was on my way to Fort Bliss Jan
1964.  In October of 1964 I graduated along with 17 other students with the
rank of Warrant Officer W1
For the next 8 years I served as Maintenance officer in Hawk missile
batteries in Korea, Germany and Key West Florida.  In 1972 I was promoted
to CW3 and was assigned as the battalion Electronics and Missile Mainten-
hance Officer (EMMO) for the 6-65 ADA BN. Hanau Germany.
1974 Assigned to the Fort Bliss ADA School as Branch Chief of The Pulse
Acquisition Radar and Battery Control Central as Branch Chief.
1977 promoted to CW4 and attended Warrant Officer Advanced school for
one year.
1978 Assigned as advisor to the Saudi Arabian Air Defense School Jedda
Saudi Arabia.
1978-1979 Generals Staff at Fort Bliss, Texas
1979 went to work for Raytheon as a Senior Field Engineer And was part of
a team that fielded the first Patriot Missile Battalion in 1982 at White Sands
N.M.
1981 Obtained a Bachelor of Science Degree, Management “Summa Cum
Laude”. 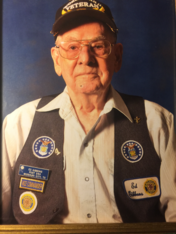 Edward "Ed" Anthony Gibbons, born 4/17/1919 in Philadelphia, Pa, raised in Boston, Mass. Joined the U.S. Army/Air Force in 1941 and was on active duty until 1947 as an Aerial Engineer on B24 Bombers.  While ferrying B24's from Chanute, Ill. to England, one of the sorties of 12 planes encountered weather/navigation problems and only 3 planes (including the one Ed was on) made it to the airfield in England with the other 9 lost at sea.
As a Boston police officer, Ed gained experience in dealing with crime up-close, and with that knowledge, went on to write and have published, 6 crime novels.
As one of the Founding members of Post 294, Ed has retired from the Post as the 1st Vice Commander. Thank you Ed for your service and your tireless service to the Post. You will be missed.​

A bit of history from our Vice Commander Edward Gibbons

Back in January of 2006 Tony Workman was planning to form a Missouri City American Legion Post.  He became Post Commander and I became Post Vice Commander. He needed an Adjutant. He said  that Jack Williams would be a good man for the Job. What an understatement --  Jack is a genius. On his own  without any help, Jack has added 80 new members to our Post 294. We now have 102  members. We got our Charter on Feb. 10, 2006. Since our Charter date, I have never missed a meeting and feel great that I have seen the results of Jack Williams' endeavors.