As I was driving home, I thought, “This was a very gratifying experience; much more than I had thought it would be”. When I placed the wreaths and said their names, it became personal. I pondered what my friend, Terry Acra, had said earlier, “It was my honor and privilege”.  I said to myself as I turned the last corner on the street to my house, “It was my honor and privilege to be a part of this too”
God willing, I will be there again next year…and every year.

Reading further on to another section of our instructions for laying the wreath:

“…place the wreath with the bow at the top, the top of the wreath should be just below the last name. Straighten out the bow and level the wreath. Step back and read the name aloud…”
It would seem at first read that this was a simple and straightforward request. It was not. It wasn’t, because you must look closely at the wreath to align it properly. It wasn’t, because you must read the name when you place the wreath. It wasn’t, because you must say the name out loud. It wasn’t, because…now think about this…if you do those simple acts as requested by the instructions, you must give a few crucial seconds of yourself and your life to the person you are respecting. Each time I did those acts of respect, especially by saying the name out loud, I felt a connection was made between myself and that person. I could feel it every time I performed the instructed acts. In those few seconds reserved for each wreath laying, I wondered about their life, what they were like…and felt grateful that they were there to protect me and my family while I was living my life elsewhere. It was up close and personal. And then, too soon, it was over.

However, the “Wreath Laying Instructions” in the handout were well thought out. The first caution was:

“This is not a race. Please take your time and be respectful…”

In other words, slowdown, think about what you’re doing. My personal involvement, although focused and serious, was impacted by that advice. I thought, “That’s a lot of wreaths, but really, what is the hurry? These are people who spent a part, some a large part, of their precious lives keeping you and me safe. They deserve some focus. ”

The general laying of the wreaths began right after the ceremony. A reported 31,000 wreaths had to be laid over the next hour or so by family members, independent volunteers and many volunteer groups such as TPREIA. That would seem to invite a somewhat impersonal and rapid mechanical response: “to get the job done.”

The ensuing ceremony was an inclusive exercise in “togetherness of purpose”; with comments by officials, dignitaries and a ceremonial wreath laying by each of the different military organizations. I don’t believe a more solemn moment could be had as bagpipes played Amazing Grace, pulling tears from already moist eyes. As I looked around, I could see that emotions were being held in check only by great effort.

A faint staccato-like growl was now beginning to drifting across the heretofore peaceful grounds. It was growing louder as I looked around to pin down the sound. And then, I saw them.

A large motorcycle escort for the trucks carrying the wreaths had left from Porter, Texas about an hour earlier. The procession was an awesome thing to behold, producing its own “shock and awe” as it pulled into the Houston National Cemetery and snaked its way through the narrow roads to its parking area. Several hundred engines rumbled their demand for respect to veterans who now resided here.

After searching around inside the cemetery for a few minutes, I was able to hook up with Mike and the group from TPREIA. A great invention the cell phone is; with maps, internet and telephone all rolled into one. They can be helpful trying to find out where you’re supposed to be, especially at an unfamiliar place. Things were looking up.

I had been asked to help with this year’s efforts by Mike Cothran (the current President of the Texas Professional Real Estate Inspector’s Association, TPREIA), of which I am a proud member. How could I turn him down? I didn’t know much about the wreath placing effort, but it sounded worthwhile. After all, I’m a veteran too. And, I had volunteered for several other activities over the past several years which gave me a great deal of personal gratification. This looked to be at least as important as those events.

So, after washing the cobwebs from my eyes and making sure I had all my clothes on (including several warm layers), I headed out for the long drive to the cemetery. About an hour or so later, I arrived only to find traffic being re-directed from the front of the cemetery to another entrance due to a traffic accident which had left several large traffic lights lying in the street. I hoped this wasn’t the beginning of a fouled up effort to honor our dead veterans.

Not just another Saturday for me.  Although still dark and cold out, with a piercing gusty wind-the kind that makes you want to stay in your warm bed, I awakened with a driven purpose. I was going to the Houston National Cemetery to lay some wreaths. This was “Wreaths across America” day, that is, the day that volunteers place wreaths on veteran’s graves at Memorial Cemeteries all across the country.

What Happens On Wreath Day?
Each year we get questions about what to expect and how the day flows.  Instead of writing about the day, we happened across a blog that was so well written that we decided to use it instead.  The following article was written by a proud veteran, Bill Medley.
****

Donations to buy a wreath(s) to be placed at the grave sites in the Houston National Cemetery will help Post 294 to raise funds for the youths of our community. Your donations will be gratefully accepted. Each year Post 294 gives a scholarship to a deserving ROTC student at Elkins High School. Thanks to you in advance for supporting this worthy cause. 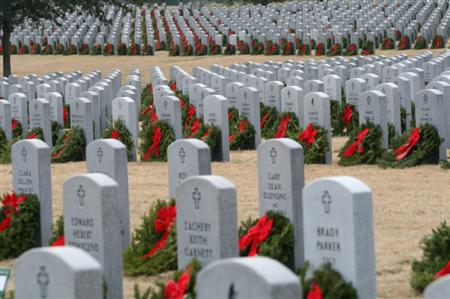 We would like for you to be a friend to our veterans and fallen heroes by supporting us in our effort to place a live wreath at each grave site of the Houston National Cemetery. The support will help our Post to raise funds in our effort to help our veterans in community activities. Our mission is to raise patriotism in America and work for veterans to"Still Serve America" ..

Thank you in advance for your support and being a friend to veterans. It is an honor to recognize our fallen heroes that died for our FREEDOM and our COUNTRY. Your support is gratefully appreciated, each wreath costs $15.00.