​The American Legion was founded after World War I in May of 1919. One of the founders was Morton C. Tiley. He was a member of the U.S. Army Ambulance Service. Tiley was chosen by the Connecticut committee as one of ten to go to St. Louis to represent Connecticut at the Legion's organizational caucus in May. Tiley was later voted as the first adjutant of Post 18 in Essex, Connecticut.

​In conjunction with the American Legion Centennial, our Post 294 will be presenting a monument in the American Legion Park of Missouri City, Texas. The presentation will take place on May 2018 and a re-dedication of the park in honor of Dee Workman. Dee's husband was the first Commander and founder of Post 294 which is named after him ( American Legion William ( Tony ) Workman Post 294 ).

​City officials are excited to share that the 501c3 Missouri City Parks Foundation is moving forward with its first strategic priority, the future Veterans Memorial slated for construction in the City Hall Complex.

American Legion Past National Commander David K. Rehbein shares a moment with Dee Workman, whose late husband is the namesake of Missouri City Post 294 that dedicated an American Legion centennial granite monument on Monday, May 28, 2018. 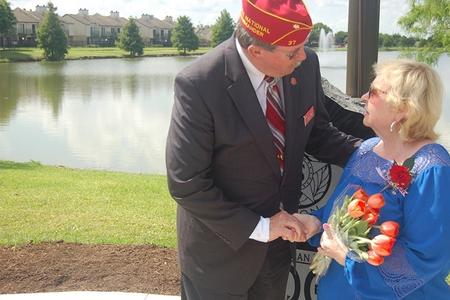 Also in conjunction with the American Legion Centennial, our Post 294 will be coordinating a veterans memorial presentation that will take place on May 2019 in Missouri City. The following is a media release for that event: 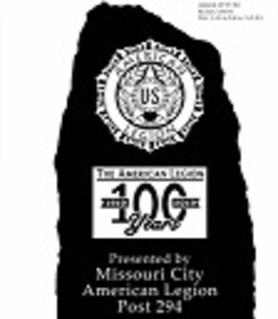 ​No one is certain when it was originally dedicated or how the 21-acre American Legion Park in Missouri City, Texas, came to be. “It was named American Legion Park, in honor of The American Legion, many years ago,” Mayor Allen Owen said. “I have been in office 32 years, and it was here long before I was ever mayor. I don’t even know how far back it goes.”

The park got a second and better documented start on Monday in this growing community of more than 70,000 just outside Houston, America’s fourth-largest city.

​​American Legion Past National Commander David K. Rehbein, chairman of the organization’s 100th Anniversary Observance Committee, delivered keynote remarks, and American Legion Department of Texas Commander John Hince spoke from his heart in a Memorial Day tribute to a high school friend and basketball teammate who was killed in the Vietnam War. “Dave will always be 17 years old to me,” Hince told the crowd of the Marine who was on his mind this Memorial Day. “Everyone has a Dave. They have people who remember them. They have family who miss them, and it doesn’t matter how many years ago it was. It gets easier, but the hurt never heals.”

Memorial Day at American Legion Park in Missouri City was a mix of many things. It honored the fallen, reflected on the past, looked to the future and celebrated the culmination of a local post project that is inspiring a $1.5 million Missouri City Veterans Memorial as the centerpiece of a major “placemaking” initiative next to the new city hall visitors center three miles away.

​“About 18 months ago, we had a concept that we would like very much to do something to let the rest of the city know that we have a presence – The American Legion,” explained Vietnam War veteran and 51-year Legionnaire Denny Thibault, who serves as Post 294 historian and centennial chairman. “We looked around and thought that the best vehicle we could use was the centennial program, with our own local people. So, we contacted a few folks and got some good ideas. From that point on, we were able to convince the city that it was a win-win for both of us. So, they said, ‘Pick a park. We’ve got 25 city parks in Missouri City.’ It made perfect sense that we found this one, American Legion Park, a 21-acre facility with a nice lake and a jogging trail, sitting back off the main drag, with a lot of trees.”

The mayor agreed that this Post 294 project in what is known as the “show-me” city of Texas has demonstrated clear public acceptance of a new veterans memorial in phase one of a major exterior overhaul of the city complex down the road. The city complex, built in the 1980s, has undergone massive structural improvements in recent years, and a 3,000-student Houston Community College branch was recently completed there, at the same time the county library is finishing up a major expansion. All the action at the city complex has led to plans for a major outdoor makeover on the city property for students, library visitors, veterans and the entire community to enjoy. Walking trails, ponds, an outdoor theater, an orchard and more are envisioned on a 30-acre space.

​“We are just tickled to death that The American Legion has this memorial,” Owen said at Monday’s ceremony. “It kind of kicks off what we’re trying to do in the city – build a veterans memorial.” He said the city’s 501c3 Parks Foundation is now raising funds specifically for the memorial, designed in the shape of a star, each point representing a branch of military service, along with a water feature, parking and reflecting pools.

“We have the architectural drawings,” Owen said. “We’ve got the site next to city hall. We just need to raise $750,000 for it. We’ve got almost half of it raised. We’re going to go to major corporations … some of the corporations that we know really support our veterans. I think they will want to be a part of this.”

He said the city is looking forward to working with the Legion to get the new Veterans Memorial underway. The centennial monument showed the mayor and others a glimpse of what can happen through such collaboration. “Together, we can excel,” said Tony Snipes, Missouri City manager.

“We thought that perhaps if we could start a little smaller and see if we could get momentum and synergies between the city and our Legion group to work,” Thibault said. “So, it was a win-win for them, and they are going to use this as a vehicle to go forward. This was indeed a stimulus.”

The post raised $7,000 for the monument at American Legion Park, and Thibault is quick to thank the Exchange Club of Missouri City for putting up $2,000 of that. Another $2,300 came from the post, and the rest was raised through individual contributions.

The centennial monument and the post-city collaboration are reminiscent of The American Legion’s earliest years under the leadership of the World War I generation, which built hundreds of parks and dedicated thousands of memorials in the 1920s, Rehbein told the crowd. He also said he hopes the second-century American Legion carries that founding spirit forward.

​“My personal vision today is that 100 years from now, on the 100th anniversary of this ceremony, another generation of veterans will gather on this spot and will dedicate a monument to the bicentennial of The American Legion,” Rehbein said. “We don’t know the legacy they will create because it is yet to come. We know that the programs and services of The American Legion are likely to be very different over the next 100 years, as they were over the last 100 years. Change is accelerating. I think we can safely say that whatever those programs and services are, they will be founded on the same values that The American Legion was founded on, in 1919.”

Rehbein’s message centered on the reasons the Legion was established nearly a century ago and the purposes that have endured. “It’s not so important what we’ve done or how we’ve done it, it’s why we have done it,” he explained.

​He told the crowd that the Legion was formed to strengthen the military, improve care for veterans in need, mentor young people, increase literacy, unite communities and hold government accountable on such issues as service-connected exposure to Agent Orange and radiation from atomic testing. From Boys State to the GI Bill, Rehbein credited the World War I American Legion founders for setting the standard and showing future generations how to fulfill needs. “They made it work. They got it done. That generation understood what they could do, and they understood fighting for a cause. All of the things they did, they did it because they believed it would strengthen America. The things we continue to do, we do to strengthen America.”

​“It’s a great honor for us to have The American Legion here for their 100th anniversary and put a monument here that finally recognizes what this park is really about,” Owen said. “We all recognize the fact that without our servicemen we wouldn’t be here today. We wouldn’t have the freedom to even gather and do this dedication had it not been for those people. My father-in-law was a Marine pilot in World War II. Obviously, I have a deep devotion to that. A lot people gave their lives to make sure that we have the freedoms we have today. I don’t think people realize – especially our young people – the sacrifices such as those who are here today made.”

Thibault told the crowd that monuments, memorials and observances to honor service and sacrifice are vital for the whole community. “Memorial Day is sacred for all veterans, and it should be for all Americans,” he said. “This is a day we pause to remember those in uniform who sacrificed their lives in defense of our nation. But that sacrifice is very meaningless without remembrance. So it is our hope that by dedicating this memorial today, it will show our collective desire to make it a civic obligation for all citizens.”

​“This is a great opportunity for us to showcase what’s going to happen over the next year here in Missouri City,” Owen said. “This is an important thing for us.”